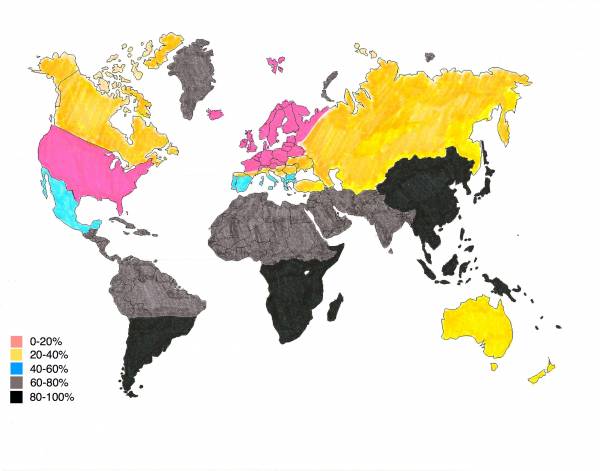 Posted at 18:42h in Nutrition science by Sarah 2 Comments
0 Likes

School is back! Are you ready for some hard core science? Ha! The lecturer said not to worry too much about the B word – biochemistry, and that you can get by without a solid foundation in chemistry. Mores the pity! I was looking forward to those cascades of reactions from glucose to ATP.

The first lecture was very interesting! We are learning about carbohydrates this week, and I learnt more about lactose intolerance, that I am now going to share with you! 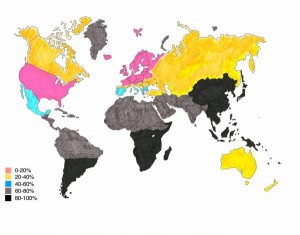 showing regions of the world with lactose intolerance

It is so interesting that in northern Europe, people have a rate of primary lactose intolerance ranging from 2 % to 15 % and generally at the lower end of the scale, whereas in Asian populations the rate of lactose intolerance ranges between 95 % – 100 %. The reason for this is due to the fact that in more northern climates, dairy was, evolutionary speaking a much more common food. Over thousands upon thousands of years, people ate more dairy, and so the rate of lactose intolerance was less in these populations, whereas in areas closer to the equator, the conditions for growing other crops was more conducive, and people ate less dairy due to the fact that their diets were filled with other agricultural crops. 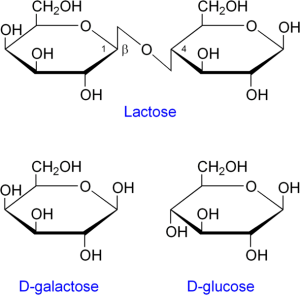 Thousands of years later, we have a real diversity in people who are lactose intolerant, or who don’t produce lactase, the enzyme, which, it must be said, breaks down the bond between one glucose molecule and one galactose molecule. If people do have lactase, and you produce less and less of this enzyme as you get older, the glucose and galactose can cross the small intestinal wall and cross into the blood stream by active facilitated transport. Sodium ions are recycled, to drag glucose and galactose into the cell even if there is a higher concentration of glucose inside the cell, ie. up a concentration gradient, and then these molecules pass either through diffusion or via a transporter into the blood stream.

The interesting thing, is that if you don’t produce lactase, the whole disaccharide (composed of glucose and galactose) will traverse through the small intestine unprocessed. Water will come into the bowel to try and flush it out, and when it reaches the large intestine, all the bacteria who are so used to digesting longer forms of carbohydrates (oligosaccharides) will go into overdrive, thinking that they have never had it so good, to cleave the bonds in a dissacharide. The result is a whole heap of fermentation, and those awful symptoms of lactose intolerance. Et voila, nasty diarrhoea  as well as cramps and other unpleasant symptoms.

The good thing, is that people who have a secondary intolerance to lactose, may still be able to eat a small amount of this food. If you have a milk latte, then some yoghurt and a pizza for dinner, you may not  have a large enough store of lactase to be able to digest all this, but a small piece of goats cheese might be okay.

The lecturer said, ‘you can easily induce a lactose intolerance’ hehe ‘just go home and drink a litre of milk’ haha.

This blog needs to do some further research on why, when the probiotic content of your stomach is improved, you have less symptoms, and something I have been wondering the past few days, is if, say you are pregnant, would a child be more likely to produce lactase, if you eat lactose yourself??

Fascinating stuff! It is so good to begin 🙂