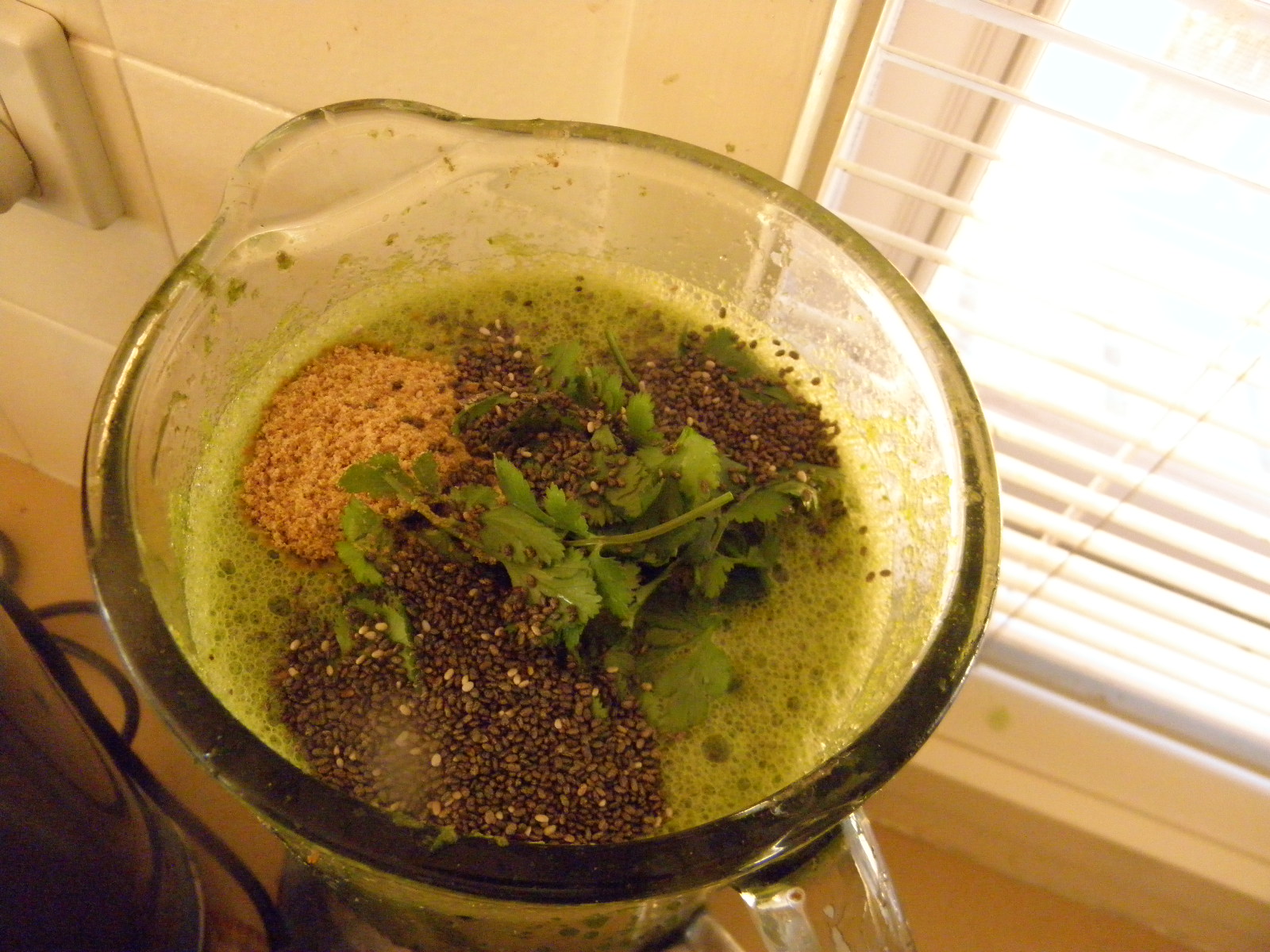 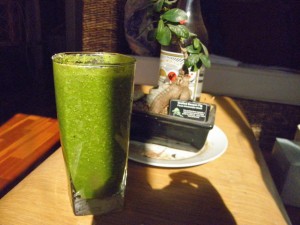 You know how I feel about the green smoothie. It is the easiest way to get a good quantity of greens and water in with out eating platefuls of lettuce and drinking gallons of water. It does have its limitations though! It is relatively high in calories due to all the fruit, and then 2 hours later, you are starving, so it does raise the amount of energy you eat in a day.

Regarding weight loss, I am starting a new tack. Respected dieticians base their programs on the Healthy Eating Guide, because it is evidence based, and to gain respect in this field, evidence based practice is preferable to a ‘detox’ theory or something else, which is not based on scientific evidence. There is no proof basically that detoxing works, although vegetarianism does correlate with a lower BMI.

Kimberly Snyder’s plan has a lot of good ideas. She is beautiful, but the diet itself is too restrictive. No dairy, no gluten, restrictions on meat. Some of her recipes are good, but others are not very palatable, and I have had a lot of trouble planning my day around her recipes. It is difficult and restrictive to base a food program on 85 or so not very appetising recipes. It is also hard to gather momentum for the whole program, after a break.

So I am trying the traditional route, to see if that 1, will be any easier to plan, (less restrictive) and 2. to see if it works. Evidence says that it will. I have found a website that allows you to determine how many calories or kilojoules you should consume over 13 weeks to get to your goal weight. They do say that people who document their food intake in food diaries have double the chance of losing weight, and I persistently feel that as a practising nutritionist, I need to have a fail safe, easy, and effective way to lose weight. It is a widespread problem.

To this end, I will be calculating all the foods I intake. It takes A LOT of effort. I can see why people don’t want to do it, or they find it too much effort. For me though, it is kind of going to be my job, and if someone has worked out all the nutritional information before hand, it makes it easy for people to pick and choose from foods, and hopefully, not to feel so restricted as on some of these more prescriptive diets, such as the 12 Week Body Transformation – Michelle Bridges. The criticism of this program is that it is too restrictive, too prescriptive and it would be difficult to sustain a diet of 1200 calories doing so much exercise each day.

I have spent the morning calculating calories from the cornerstone food and beverage, the green smoothie, it was very interesting, and I have developed a series of scenarios, based on what you want to get out of your eating plan. 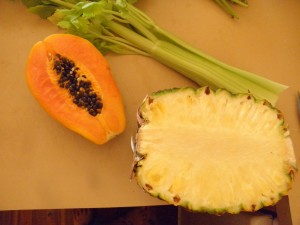 The calculation for the no holes barred green smoothie including 2 cups of spinach or rocket, 2 cups of lettuce or kale, 1 cup of celery, 1 cup of pineapple, 1 cup of papaya (spring fruit), 1 banana, lemon juice, coriander, LSA, flaxmeal and chia seeds:

Calories is a whopping 659 calories or 2767 Kj per 1.5 L of this smoothie concoction. The biggest contributors to this high calorie food is the fruit, the LSA and the chia seeds.

This recipe does contribute 590mg of calcium or more than 50 % of your daily needs for calcium which is good. The LSA (linseed, sunflower and almonds) is supposed to be very good for your liver function, and it also contains a whopping 29g of fibre (total), which is very good.

Scenario 2 – fruit smoothie with no accoutrements

The nutritional information for the smoothie that does not have the flaxseed, chia or LSA but does comprise all the fruits as per the traditional glowing green smoothie recipe (spinach, lettuce, celery, pineapple, papaya, banana, lemon, coriander) is as follows:

This is a lot of carbohydrates and sugars which mainly comes from the fruit. My concern with this scenario is that you have the smoothie with so much sugar and then two hours later you are hungry. It would seem to me to be more ideal to drink a green smoothie that is lower in carbohydrate and sugar, and have whole fruit mid morning, so that you still get your daily dose of fruit, but that it keeps you full until lunch time. 🙂

We come to the middle ground.  You will never convince me that we should remove the green smoothie completely, so my adaptation is based on the liver cleansing smoothie but with one tablespoon of flaxseed which is a good contributor of omega fatty acids, and one tablespoon of chia, which while high in calories and fat, is a great contributor to calcium intake, and so I wanted to keep it in the recipe.

I think it is a good compromise. It is pretty tasty too. It feels good on the inside. As though it is a healthy choice. Perhaps if I was to advise someone else to drink this I would add a banana to the mix, just to give it a little sweetness. I also drank this with 1 tbsp of psyllium husks in the first glass, but I haven’t calculated its nutritional information.

Calorie counting – the beginning of the science

It is hard work, and it takes a lot of effort, but once it is done, you have the figures, and for someone who is studying food science it is fun!