genetically modified organisms in the wild

30 May genetically modified organisms in the wild

Posted at 12:26h in Nutrition science by admin 0 Comments
0 Likes 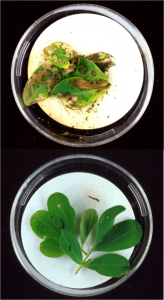 I am reading Michael Pollan’s ‘Botany of Desire’ at the moment, and a chapter about the history of cultivation of potatoes. There was the most enchanting description of a potato that had been cultivated in South America which is marbled on the inside by a bright blue colour. Amazing!

By way of experiment he planted some ‘new leafs’ in his garden. These potato plants have been genetically modified by the company Monsanto to express genes native to the Bt micro-organism, or Bacillus Thuringiensis. Beetles who feed on the leaves of these potato plants will die due to the inbuilt pesticide action of the Bt.

The risks of GMO

The real concern with genetically modified organisms is that no one knows what the eventual effects of this manipulation might be in the wild. Monsanto develop and market these strains of potatoes in the expectation that eventually they will give rise to superbugs that are resistant to the Bt toxin. In an interview with Michael, they suggested that they have 30 years grace, and in that time, the natural pesticide will be rendered ineffective due to the co evolution of new resistant bug species.

‘Trust us’, they say. ‘We will simply develop a new pesticide (or gmo) in that time which can be used instead of the Bt toxin’. This is a real concern, given that organic farmers use topical application of Bt to their plants, when required, and to deliberately render it ineffective will have serious consequences to their farming practices.

It is of significant concern, also, that when bees cross pollinate with these gmo’s in the wild, they will carry some of the genetic material to be combined in the genomes of other plants. There is no telling how wide the modification can spread.

I was shocked and dismayed reading this chapter, about a plant, whose genetic material has become the intellectual ‘property’ of a corporation with little or no regard for the consequences.